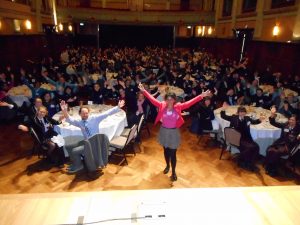 The LNF researcher Catalina Oana Curceanu, winner of the prestigious 2016 Women in Physics Lecturer International Award of the Australian Institute of Physics, gave a series of lectures across Australia last August, holding about 30 seminars and conferences in a number of universities, research centers, schools and public sites, such as the Sidney astronomical observatory or the Wollongong Science Centre.
The series of conferences started in Tasmania and moved to Sydney, Wollongong, Brisbane, Adelaide, Perth, Canberra and Melbourne. A real tour de force!
Catalina met 6 years old children, but also interested audiences of all ages, that took part in her conferences, in which she talked about stars, black holes, quantum technologies and her research at LNF-INFN and at Gran Sasso LNGS. One of the goals of the tour was lecturing about science to girls, encouraging them to pursue a career in science. A goal which was achieved, considering the girls’ overwhelming enthusiasm and participation in the Australian meetings. One of the most interesting activities was the Girls in Physics Breakfast, which involved, despite the early start at 7 am, more than 100 girls from 20 different Melbourne colleges.

Catalina did not have a chance to see many koalas or kangaroos, but she got to meet a lot of enthusiastic people, who love science and consider it a fundamental resource for our society.

Catalina came back to Italy with a lot of new ideas for our students and teachers, and for all those who are interested in science.